Kurz Technology for
Banknote of the Year

Fürth/Germany, 18 May 2016: The International Bank Note Society (IBNS) has voted the new 5 Dollar bill of New Zealand, equipped with foil security from Leonhard Kurz, as Banknote of the Year 2015. Each year, the IBNS awards a banknote for artistic banknote design and the use of innovative security elements. The new 5 Dollar banknote of New Zealand convinced the jury with its color concept and a novel security feature developed by Kurz: A diffractive optically variable security foil is applied in hot stamping over a transparent area in the polymer banknote. The foil is based on the proprietary, non-holographic, vector-based KINEGRAM® technology, which Kurz offers exclusively for high-security applications on banknotes and government documents. With the transparent window and the applied KINEGRAM®, Kurz has successfully created an entirely novel security element in both optical and anti-counterfeiting characteristics, for which an entirely novel application technology had been conceived. "With this unique solution, we achieved a quantum leap for the security of banknotes," explains Peter Mühlfelder, Head of Business Area Security at Kurz. "We are delighted and proud that the Reserve Bank of New Zealand won the prestigious "Banknote of the Year" award with our security feature and an extremely well achieved design. The recognition we experienced in the past months is both an incentive and an obligation for us to continuously place our efforts in developing our KINEGRAM® technology further and pushing the boundaries of anti-counterfeiting security, in order to always be a step ahead of the criminal." Kurz had been named "Banknote and Currency Services Provider of the Year" earlier this year at the Central Banking Awards event hosted by Central Banking Publications. The jury of this award was not only impressed by Kurz's highly sophisticated and innovative optical security technology, but also admired the very close collaboration of Kurz with leading central banks around the world and the individual solutions provided to each of their specific requirements. 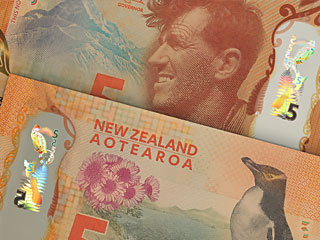 Kurz Technology for Banknote of the Year
(high resolution, 1.2MB)